the first time to Dan Pentilla’s knowledge, evidence of Surf Smelt spawning has been found in Cornet Bay east of the boat ramp.  When Dan processed the Cornet Bay samples turned in recently by Sound Water Steward (SWS) volunteers participating in the Forage Fish Sampling project, he found over 100 surf smelt eggs.  As many SWS members know, Dan Pentilla is a regionally recognized expert on forage fish, which include Surf Smelt, Pacific Sand Lance and Pacific Herring.

The Marine Resources Committee (MRC) sponsors the Forage Fish Sampling project in Island County and SWS volunteers provide most of the field labor.  Ruth Richards and Lois Farrington are MRC co-leads for the Forage Fish Sampling project, directing and participating in sampling several beaches for the presence of forage fish eggs.  They are both graduates of the last Beach Watchers class of 2015 and active Sound Water Stewards (SWS).

The MRC Forage Fish Sampling project includes both Index Sites and Restoration Sites.  The Index Sites are sampled monthly and the Restoration Sites (near or at habitat restoration projects) are sampled every two weeks.  SWS volunteers at the Cornet Bay site over the last two years have included Jay Adams, Carl Klein, Lisa Harkins, Betsy McCullough, Gill Montano, Suzette Montano, Janine Shelley, Steve Shelley, and Rich Yukubousky.  There are several Index and Restoration Sites on both Camano Island and Whidbey Island which are being sampled by these and other SWS volunteers, but more volunteers are welcome.

Other than this being the first documentation of Surf Smelt spawning in Cornet Bay, it is especially interesting because this is an MRC Restoration Site.  The Cornet Bay Restoration Project included removing a creosote bulkhead, rehabilitating the degraded intertidal beach and planting native riparian vegetation in a heavily used area of Deception Pass Park which supports a boat ramp, dock and an extensive parking lot.

While the Surf Smelt eggs were not located within the boundary of the Cornet Bay Restoration Project, they were found less than 1000 feet to the east (at sample site 1).   Two other forage fish sampling sites are located within the actual restoration area.  Since the drift cell along this shoreline of Cornet Bay moves sediment from east to west, it is hoped that future sampling will document forage fish spawning in the area where the bulkhead was removed and the beach restored.

The general concept of habitat restoration projects is similar to the premise of the movie Field of Dreams “Build it and they will come”.  Let’s hope Surf Smelt find the Cornet Bay Restoration Project suitable spawning habitat. 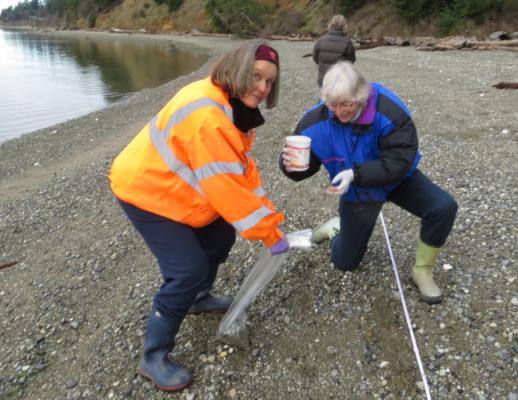 Gathering a substrate sample to look for forage fish eggs.

After collection, the samples are screened and winnowed to reduce the volume.  Sand lance and surf smelt, as obligate beach spawners, are the targets of the survey.  Their eggs attach to grains of sand, and are winnowed out of the bulk sample with a “blue bowl” in a technique adapted from gold panning. 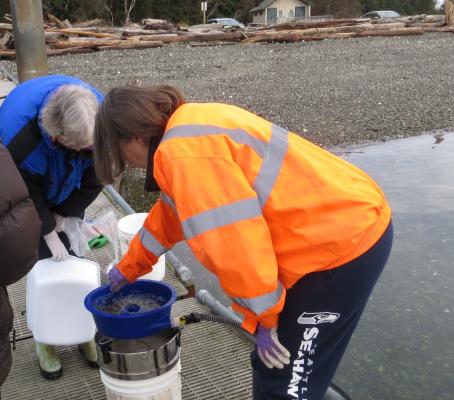 The winnowed material is then put into a sample jar, to be examined under a microscope, and any eggs tallied.

For more information on forage fish and the sampling process, visit WA DFW – Marine Beach Spawning Fish Ecology which has many resources, including this introductory slide show on forage fish, the kinds of beaches where they spawn, and an introduction to the sampling protocol. This MRC article talks about earlier sampling at Cornet Bay on Whidbey Island, in assocation with restoration efforts there and this more recent article talks about the 2015-2016 survey.

- from around the Sound
- SWS Articles – Index