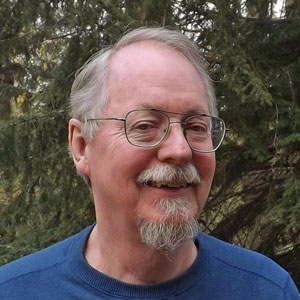 SWS Class of 2002 (first BW class on Camano). Moved to Camano with his wife, Kathleen Chase, who is also an active Steward.  Served on Beach Watchers Advisory Council (BWAC) 2002-2004. Led VET Training on Camano in 2006.

Has taught numerous classes for Stewards on topics such as mushrooms, landscaping over drainfields, waste reduction and recycling, and presented at Sound Waters University.

Currently represents SWS and Camano on Island County Marine Resources Committee, serves on the Lighthouse Environmental Programs (LEP) Board of Directors, is Co-Lead for Camano 101 scheduled for Sept. 24, 2022, and is Vice President of the Cama Beach Foundation where he also serves as co-lead for educational activities.

Scott co-organized Camano 101 held on March 1, 2020, and previous iterations of this event as well, including Whidbey 101. Scott was an active participant for several years in the (now-defunct) Snohomish-Camano ECO Network (Education, Communication and Outreach Network), a program of Puget Sound Partnership.

Scott continues actively volunteering for WSU Waste Wise, including building the “Pay it Forward” camping supplies recycling pavilion in front of the Center for Wooden Boats at Cama Beach State Park in 2019. Upon retirement, Scott was presented with Snohomish Conservation District’s “Lifetime Achievement Award” at a ceremony in Mukilteo in 2018. As one of the original team who created the Port Susan Marine Stewardship Area, he is currently working with the MRCs in Island and Snohomish counties, as well as other local partners, to update the materials.