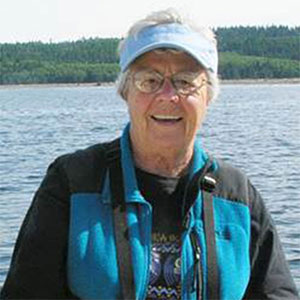 Phyllis Kind, Ph.D. was presented this award before a packed house of 530 attendees during opening ceremonies of the one-day Sound Waters University. Nominated by a fellow volunteer, Dr. Kind was described as having “an unquenchable curiosity for the natural world and the passion and energy of a college graduate student” who tirelessly volunteered for no less than seven local Washington non-profit organizations.

As a WSU Beach Watcher, Kind has monitored beaches at Maxwelton and South Lagoon Point, made educational presentations and provided support to many affiliated organizations,  In 2012, Dr., Kind stepped in to continue an eel grass monitoring project initiated by Jan Holmes in collaboration with Sandy Wyllie-Echeverria of Friday Harbor Labs, to gather a fifth year of data and prepare the study publication. This study, a collaboration of Beach Watchers and the MRC, is an example of how citizen science projects contribute to ongoing research on the health of our coastal waters.

“Her efforts resulted in the designation of two local Stewardship Areas – Saratoga Passage and Admiralty Inlet, which ensured protection to safeguard the waters, marine life, plant life and surrounding shores and beaches” said long time MRC member Dick Toft.  He noted that that during the eight years she served on the MRC, Dr. Kind was instrumental in the building public support for our local Marine Protected Areas.

At the same time, Dr. Kind served as Vice-Chair and Chair of the Northwest Straits Commission as they implemented a project to address the ongoing damage posed by derelict fishing gear in Puget Sound to fish, sea mammals, diving birds and shell fish populations.

As a member and leader of the Whidbey Audubon Society, Dr. Kind spearheaded monitoring  and data collection of bird species and counts at Deer Lagoon, Dugualla Bay, the Greenbank Farm and Trillium Community Forest.  Statistics from these long running studies have been used by numerous organizations to secure grant funding, preserve and protect habitat and advocate for conservation policy.

As co-leader of the Pigeon Guillemot Research Group since 2004, Dr. Kind, and Frances Wood, designed, administered, organized and implemented this survey of a population of sea birds that nest in burrows in the bluffs of Whidbey Island.  Each year the Pigeon Guillemot Survey project trains 30-40 citizen scientist volunteers who observe, record and submit data collected from 26 Pigeon Guillemot colony nesting sites around Whidbey Island. The Washington State Department of Ecology recently identified data collected from these surveys as one of several factors to assess the effects of the sinking of the fishing vessel Deep Sea on the habitat and water quality conditions in Penn Cove.

Scientific in her approach, enthusiastic in her manner, eager to make a contribution and always willing to share her time, skills, knowledge and know how, Dr. Kind continues to make a significant impact with the organizations and people she engages.  Her legacy of unselfish service and leadership with so many local organizations combined with her significant contributions to citizen science research make Dr. Phyllis Kind a most deserving candidate for this honorable award.