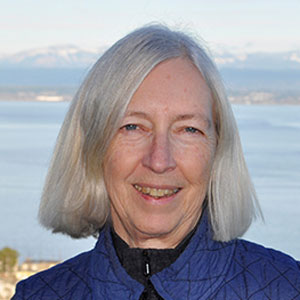 Kathy was born in NW Washington and grew up spending many summers on San Juan Island.

She retired several years ago from the University of Colorado Anschutz Medical Campus in Aurora, Colorado after working as a senior project manager and administrator involved with the multi-million dollar relocation of the university medical campus.  She has a Masters in Architecture and a Masters in Business Administration.  While in Colorado she also served on several community boards.

After living in Colorado for over 40 years she and her husband returned to the NW, moving to Camano Island in 2016.  In 2017 they signed up to participate in the UW Sea Grant Green Crab project.  At a green crab training session they were made aware of the SWS organization by attending SWS members.  Intrigued by the opportunity to learn more about the physical environment of their new community Kathy joined and graduated with the 2017 SWS Class.  Her husband graduated with the 2018 class.

Kathy has continued to participate in the Green Crab project on Fidalgo Island and Camano Island; intertidal monitoring and Sound toxins surveys on Camano; and, has served on the SWS Fund Development Committee for three years.