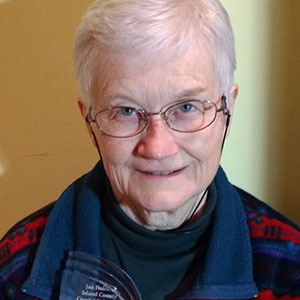 Carrying out nearshore research and data collection is messy business. Citizen volunteers who do this on the beaches of Whidbey and Camano islands joke about boots in the mud, but the woman they honored Saturday is known for something else.

“She keeps her butt in the chair,” said Jill Hein, one of many who nominated Connie Clark to become the Jan Holmes Island County Coastal Volunteer of the Year.

The award is presented to one individual a year by the Island County Marine Resources Committee, Washington State University Extension and Sound Water Stewards.

Its title is a mouthful, but the honor is huge. Before her death in 2011, Jan Holmes was a passionate advocate of citizen research as a marine biologist and tireless volunteer. She served as a member of the Marine Resources Committee as well as the WSU Beach Watchers. She and her colleagues in the Beach Watchers program championed the study of eelgrass, shoreline life, forage fish and juvenile salmon that rely on the county’s shoreline.

Clark is the creative genius whose web design and data systems make it possible for these volunteers today to record what they find, and for the public to easily register for events such as the huge one they attended Saturday at South Whidbey High School, Sound Waters University. It means long hours for Clark in meetings, brainstorming with others, and then sitting down to the real work, alone, at her computer.

“So much of her work is in the background,” Hein said. “Many people don’t notice.”

Jim Somers was a WSU Beach Watcher in 2007 when Connie and her husband, Neal, applied for membership.

“This was at a time when the organization was in near crisis due to our archaic method of recording volunteer hours, developing an online newsletter and running registration for our programs,” he said. “Little did we know what a treasure Connie would be. She stated she had database and website experience and we thought she would fit in.”

Holmes set the bar high for coastal volunteers. Jan joined the young Beach Watchers program in 1990 and, within a few years, earned her master’s degree in marine biology.

“It was just amazing what Jan did,” said Don Meehan, former director of Island County WSU Extension. “She led the effort in shoreline intertidal monitoring. We know more about our Island County shoreline than probably any other county in all of Puget Sound. She cranked up the eelgrass monitoring team, a very technical group. She loved teaching and loved helping others. She accomplished a great deal.”

About Clark, Meehan said, “She is just outrageously spectacular and helpful.”

“She first put our catalog online so we didn’t have to mail a 16-page booklet to several thousand people every year. She then created ways to contact presenters and exhibitors online, so that all actions can be tracked by all team members efficiently and with an historical record.”