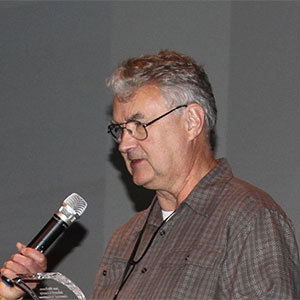 Bob Gentz admits he briefly considered bolting from the auditorium Saturday when his name flashed up on the screen at Sound Waters University.

But event chair Anne Baum caught his arm and said, “Congratulations, Bob. I’m going to walk you to the stage.”

“Bob is a get ‘er done person,” said former WSU extension director Don Meehan, who announced the honor and introduced Bret Holmes, stepson of Jan Holmes, for whom the award is named. “Bob has devoted nearly 10,000 hours of service to our county’s coastal beaches.” This is both sophisticated research and in-the-trenches work. “He’s not afraid to do the messy stuff. Not hindered by harsh elements, not even phased by a class of sixth-graders.”

As Gentz accepted the award he remarked, “Jan was really the inspiration for me and continues to provide motivation for many of us.”

Holmes set the bar high for coastal volunteers. She joined the young Beach Watcher program in 1990 and, within a few years, earned her masters degree in marine biology. “Prior to that she was a flight attendant and an artist,” Meehan said. “It was just amazing what she did. She led the effort in shoreline intertidal monitoring. We know more about our Island County shoreline than probably any other county in all of Puget Sound. She cranked up the eelgrass monitoring team, a very technical group. She loved teaching and loved helping others. She accomplished a great deal.”

Gentz’s own list of accomplishments is also quite long and defies easy summary.

He participates with teams collecting data on eelgrass health and how juvenile salmon use the shoreline. This information is used by the Island County Marine Resources Committee to plan and evaluate work such as a large beach restoration project currently under way at Cornet Bay. As a member of Sound Water Stewards, Gentz also helps monitor population trends and distribution of marine life on Island County beaches in accordance with scientific protocols. He assists Whidbey Watershed Stewards in smolt counts and spawning surveys, and volunteers with Whidbey Camano Land Trust, Whidbey Audubon and other groups.

His work adds to a large body of knowledge being developed by local volunteers that augments what state and federal agencies have been able to collect with their limited staff and thinly-spread resources.

Gentz also studies trends in seabird mortality as part of the COASST survey and is a member of the Central Puget Sound Marine Mammal Stranding Network.  He is treasurer of Goosefoot, focusing on enhancing the environmental and economic vitality of Bayview Corner, and has been treasurer of three local organizations –Whidbey Audubon for two years, Whidbey Island Fly Fishing Club for more than five years, and Whidbey Watershed Stewards for four years, where he has contributed project management for outdoor classroom construction projects.