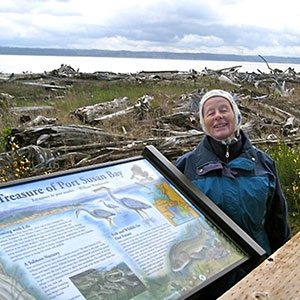 COASTAL VOLUNTEER OF THE YEAR

Barbara Brock of Camano Island is our 2010 Island County Coastal Volunteer of the Year. She is pictured at Iverson Spit Reserve, where she had just finished installing an MRC interpretive sign with a work party of volunteers from Friends of Camano Island Parks. Carol Triplett snapped the photo.

The selection committee chose Barbara Brock for her extensive volunteer service as a WSU Beach Watcher and for her work with other local groups engaged in environmental stewardship. She is a member of the Water Resources Advisory Committee (WRAC) and has served on the Salmon Technical Advisory Committee, a WRAC subcommittee.

Brock was a member of the first class of WSU Beach Watchers trained on Camano Island in 2002 and helped develop the Shore Stewards program that later expanded to Whidbey Island and throughout Puget Sound. She headed the volunteer team carrying out juvenile salmon seining research on Camano Island during the period of active seining studies there and currently does some salmon recovery work on Kristoferson Creek, where she also keeps an eye on the beavers. She helped develop the county’s Camano Island Non-Point Pollution Plan and currently sits on the Shore Stewards Advisory Committee and on the board of Friends of Camano Island Parks.